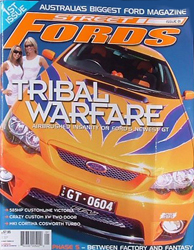 March 2005 and Streets Fords Magazine hits the shelves of news agencies for the very first time.

How is that significant to the Falcon GT Club you ask?

Simple, the club was invited to be the first club in Australia to be featured in this new National publication.  Originally scheduled to be a four page spread featuring a WA club, the editors were so impressed with the quality of images and information, the story was expanded to 5 pages.

Local photographer Rick McDowell was commissioned by Street Fords magazine and 30 odd members turned up to the Kwinana industrial area.  It took over an hour for Rick to compose the shot and arrange all the cars and as you can see from the cover page it looked great.  Paul Lloyd  brought a long a cherry picker from Coates to give us an elevated view and once Rick had taken his shots various members ventured a ride to take their own high shots.  Pat L allowed Paul to take the picker to it's maximum and height and regrets the decision ever since.  Just after they started their descent the machine ran out of fuel, and it took a while for Paul to be able to return to ground level running on the starter motor. 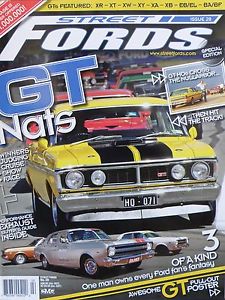 Street Fords also came onboard as the major Magazine sponsor for the 2007 GT Nationals hosted by the Falcon GT Club of WA.  In return for exclusive coverage of the event Street Fords did a lot of promotion in the leadup and then dedicated the best part of a magazine to covering the show and the cars of disp