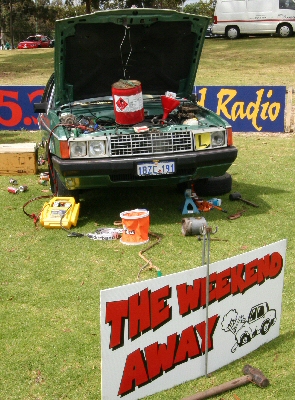 In 1984 it was deemed that the club was still too much of a fledgling to be able to present a large scale cars show to the general public.  Thus the Falcon GT Club of WA invited the Mustang Owners Club of WA to co-host the first All Ford Day Car Show in Western Australia.  This first show was put on at Subiaco and gone on from strength to strength ever since.

The show now attracts in excess of 400 cars on display, approximately 20 traders and over 12 000 punters file through the gates.  Since the second show in 1985, the All Ford Day has been presented every two and has moved from Subiaco Oval to Leederville Oval, to Perth Oval and the latest venue has been Bassendean Oval.

In 2000 the All Ford Day was invited to help Ford celebrate it’s 75th birthday of Ford Australia and therefore an extra show was put on at Dixon Reserve in Rockingham.  This show was well supported by Ford Australia and drew a huge range of cars and spectators.

In 2001 the committee introduced the concept of an All Ford Day cruise.  The aim of this was to encourage new people to enter their cars into the show and to give organisers a bit of a break after putting on 2 big shows in a row.  Tradition now is that a cruise is run on the even years and the show on the odd years.